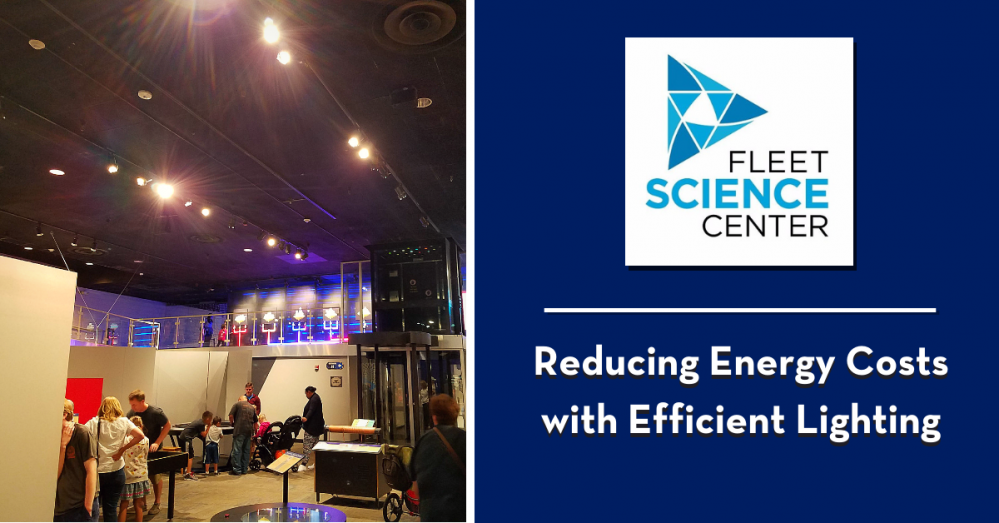 As part of the Fleet Science Center’s ongoing efforts to reduce their building’s energy usage, the organization is replacing existing light bulbs throughout the building with 1,100 energy efficient LEDs. By using these new bulbs, they expect to save $16,365 through reduced energy costs.

The Fleet Science Center, also known simply as the Fleet, has continued to operate more sustainably over the past decade. These efforts are recognized by their building’s LEED Silver certification (Leadership in Energy and Environmental Design) from the U.S. Green Building Council. The Fleet has also been producing renewable power since 2007 with an array of rooftop solar panels, which can generate more than 1,000 kilowatts of power (enough to run 65 homes)!

Along with their efficient operations, the Fleet has multiple exhibits to educate staff and visitors about water conservation and energy efficiency.  In a partnership with San Diego Gas & Electric (SDG&E), their “So Watt” exhibit educates visitors about several topics related to energy, including the ways energy is produced, how power grids are operated, and how to conserve energy at home.  It also includes an interactive exhibit where guests can see the difference in energy usage between traditional bulbs and energy efficient florescent bulbs by using a crank to power the bulbs.

Their energy management standards led them to installing energy-efficient LED bulbs throughout their public-facing exhibits and office spaces. Through one of SDG&E’s instant rebate programs, the Fleet was able to purchase 1,100 new LEDs at a lower cost.

These new bulbs have several environmental benefits. LEDs are significantly more efficient in converting all of the energy they use into producing light, while other bulbs (like incandescents) waste energy as heat. LEDs also do not contain toxic elements that are difficult to recycle, like the mercury found in florescent bulbs.

The Fleet found that installing LEDs is also a great financial investment. Because LEDs use less power, the Fleet will save a significant amount of money through reduced energy costs. Their return-on-investment (ROI), which compares the cost of project with the future saved expenses, shows that the project would pay for itself through reduced energy costs in less than a month! Because their saved energy costs are more than the cost of the project, they will save a significant amount of money through installing the energy-efficient LEDs.

Calculating a return on investment is a great way to see the financial benefits of energy efficiency projects. Along with any project proposal, showing cost savings to decision makers can make it much easier to raise interest in projects that will reduce your building’s environmental impact.

Are you interested in calculating the return on investment for an energy efficiency project at your home or business? Check out these ROI calculators available on the EnergyStar website!