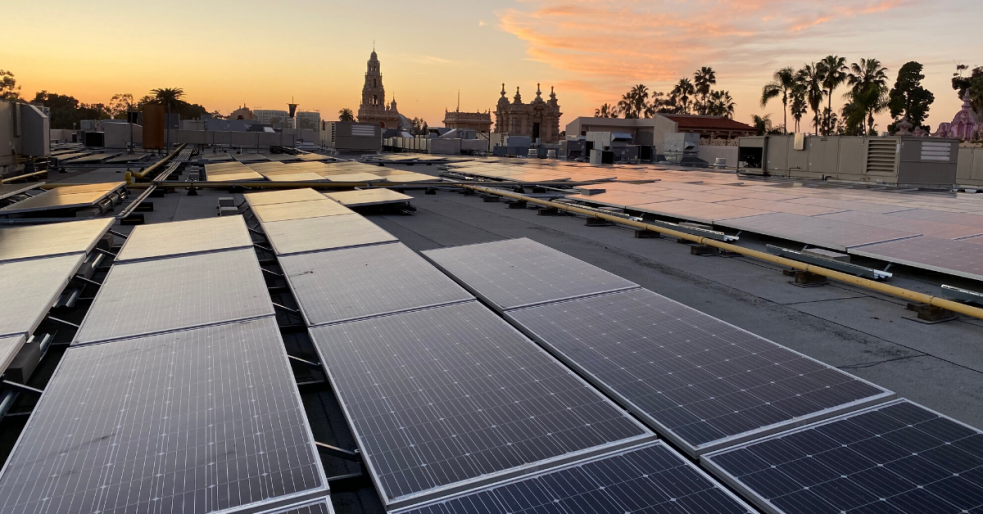 A downloadable version of this release can be found here.

The Balboa Park Cultural Partnership has announced the achievement of four LEED building recertifications in famous Balboa Park. This achievement is a testament to the continued commitment of the Cultural Partnership, its members, the San Diego Green Building Council, the City of San Diego, and San Diego Gas & Electric (SDG&E) to maintain and operate the historic buildings in Balboa Park using green practices. The recent recertification of Casa de Balboa, Casa del Prado, the Fleet Science Center, and The Old Globe are a continuation of the Park’s centennial goal of maintaining 10 LEED certified buildings in Balboa Park.

Moreover, the goal of 10 LEED certifications in Balboa Park was a precursor to the City of San Diego’s Climate Action Plan, and validates the sustainability practices, projects, and efforts established in Balboa Park since the inception of the Cultural Partnership’s Sustainability Program in 2008. The focus on “green buildings” – one of which is more than 100 years old – demonstrates the critical role of building management and the positive impact it can have on our environment. In maintaining green buildings, organizations in Balboa Park are contributing to the City’s Climate Action Plan goals, as well as the overall health and resiliency of the community.

Deborah Klochko, Executive Director and Chief Curator at the Museum of Photographic Arts said on improving to LEED Gold at Casa de Balboa, “Our team at MOPA has always been stewards of the environment by improving each of our practices to have as small a carbon footprint as possible. We are committed to clean power with other Casa de Balboa tenants by installing solar on our roof. Our carpets and reupholstered theater seats are made of recycled materials, and a skylight in the museum’s atrium reduces the need for artificial light. We’ve switched to LED lights and installed controls and motion-sensing technology that dims the lights when no patrons are in the space to further reduce our energy consumption.”

Since the first LEED certification in 2009 of the San Diego Natural History Museum, the Cultural Partnership has worked with the arts, science, and culture organizations in Balboa Park to complete over 100 energy efficiency and water retrofit projects helping save multiple non-profit members nearly $2 million in operation costs, and diverting 5,139 metric tons of carbon dioxide equal to greenhouse gas emissions from 1,091 passenger vehicles driven for a year.

“We are very proud of the sustainability efforts made by our member non-profits over the last 10 years here in Balboa Park,” said Peter Comiskey, Executive Director of the Balboa Park Cultural Partnership. “Every one of them understands the importance of improving efficiencies, for both the planet and their bottom line. The recent LEED recertifications underscore their continued commitment to invest in green efforts.”

Additional thanks go to the San Diego Green Building Council and their Green Assistance Program volunteers who provided sustainability expertise and support by helping organizations collect and document data for the LEED recertification submissions.

Josh Dean, Executive Director of the San Diego Green Building Council stated, “This was an extraordinary opportunity to engage 40 GAP volunteers in partnership with Balboa Park and City of San Diego staff in our hands-on learning program to recertify these four buildings. Being able to consistently come back to the Park, ever since the first GAP project in 2012 at the WorldBeat Cultural Center, and have these historical facilities continue to achieve high marks in the LEED O+M rating system verifies the Balboa Park Cultural Partnership’s leadership in driving sustainable operations in buildings. We can’t thank our volunteers, Park staff, and City staff enough for their time and commitment to the recertification of these LEED projects.”

For more information about the Cultural Partnership’s ongoing sustainability efforts, visit their web page at: https://bpcp.org/sustainability/

ABOUT THE CULTURAL PARTNERSHIP The Balboa Park Cultural Partnership serves as the collaborative body and collective voice for 26 arts, science, and cultural institutions in Balboa Park. Together we achieve greater effectiveness, innovation, and excellence and contribute to the vitality and sustainability of Balboa Park. Our collective of 500 trustees, 7,000 volunteers, and 3,500 staff serve more than 6.2 million visitors annually. Learn more at www.bpcp.org

ABOUT BALBOA PARK Located near downtown San Diego, Balboa Park is the largest urban cultural park in the United States. First established by the City of San Diego in 1868, it is also one of the oldest city parks in the nation and is the most visited single destination in San Diego. Its 1,200 acres include 17 museums, many gardens and attractions, the San Diego Zoo, miles of hiking trails, and multiple athletic complexes to explore and discover. For more information, visit www.balboapark.org