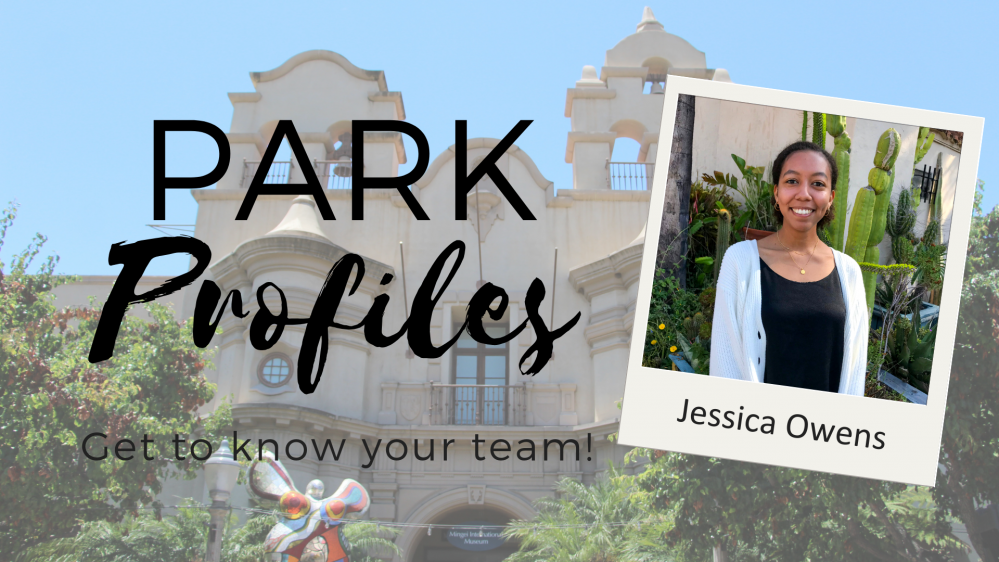 Jessica Owens is the Education Assistant at Mingei International Museum. As the Mingei Museum undergoes its transformative renovation, Jessica assists with continuing to bring the Museum’s education programs to the community by coordinating the new Mingei Away program and other educational workshops.

Can you tell us a bit about your role as education assistant?

As education assistant I work closely with the docents, our museum has about 50 active docents who give tours and are very self sufficient when we’re open. Since we’re closed right now we’ve started a new program called Mingei Away where we bring our tours into the classrooms. We do slide presentations around different themes in our collection and bring in tactile objects, which people can hold and touch which is really cool because you never get to touch stuff in museums! I also lead our monthly Family Sunday program, which has moved off site to three local libraries and includes leading an art project and working with guest artists and performers. Other than that I generally assist with our other educational and public programs.

What is your favorite part about your job?

My favorite part is probably working in the classrooms with students, especially now with Mingei Away. Before the museum closed I worked with students maybe a few times a month, but now I work more closely with kids in the classroom. I love seeing their excitement learning about something new and the types of objects they can find in a museum. I think the program really opens up their minds to what an art museum is, and being in the classroom is a really personal way of opening them up to using a museum as their resource.

What other ways has the Mingei Museum continued its educational programs to the public during its renovation?

We’ve continued to do professional development programs for educators and our Outreach Program has continued in the same capacity, which includes a three-month period in three different schools in City Heights. We’ve also started doing a lot of workshops in our store, Shop Mingei which is currently located in Liberty Station. That’s pretty new, we weren’t doing workshops as frequently before we closed. We have Mingei Masters which are more intensive workshops over a day or two and then Mingei Makers, a shorter alternative, both of which are fun and immersive.

Are there any special events or programming coming up that you’re particularly excited about?

I’m excited that we’ve extended our partnership with the San Diego Library so we’ll be continuing Family Sunday at City Heights, Logan Heights and the Valencia Park/Malcolm X Branch library. I’m also looking forward to planning our next few months working with a lot of different community partners. For example we recently started working with artists and performers from Arts for Learning San Diego. We’ve worked with Write Out Loud to do live performances which were amazing and every year we host the La Jolla Playhouse POP Tour. Mingei also has some exciting pop up exhibits around town planned for the fall so we will be doing programming based around that.

What do you like to do outside of work in your free time?

I’m not from Southern California so whenever I get the chance I try to visit different areas nearby. Since January I’ve visited Santa Barbara, Santa Monica and Anza-Borrego. I feel like I’m just now finding out about so many places so it’s fun to get a better sense of Southern California’s landscape. When I’m not doing that I really like taking pictures, I love photography which is why I started working at MOPA when I first moved to San Diego.

Do you have a favorite artist, musician, album, movie or show?

I love learning about black contemporary artists, I actually had a blog going for a while where I would go to shows in San Diego and LA and write about them. Erica Deeman is a photographer who does these large scale portraits, they are so beautiful and I’m obsessed! She had a show at Pier 24 in San Francisco, which is where I first heard about her and she just had a show at MOPA last year so I got to see her Artist Talk.

For shows and movies, I really like Queer Eye. I’ve been watching the new season and it’s really good, I cry every time. I also really like this movie called Submarine. It’s a coming-of-age film, directed by a British comedian Richard Ayoade who I think is hilarious. It’s a really sweet movie and I like the soundtrack too.

I want to say it’s the Botanical Building, just being in there is amazing. I love being surrounded by the plants. It’s so peaceful and nice, and I like that there are signs with their scientific names too, it’s almost like a museum for plants. Other than that it would probably be MOPA, they do amazing shows consistently.