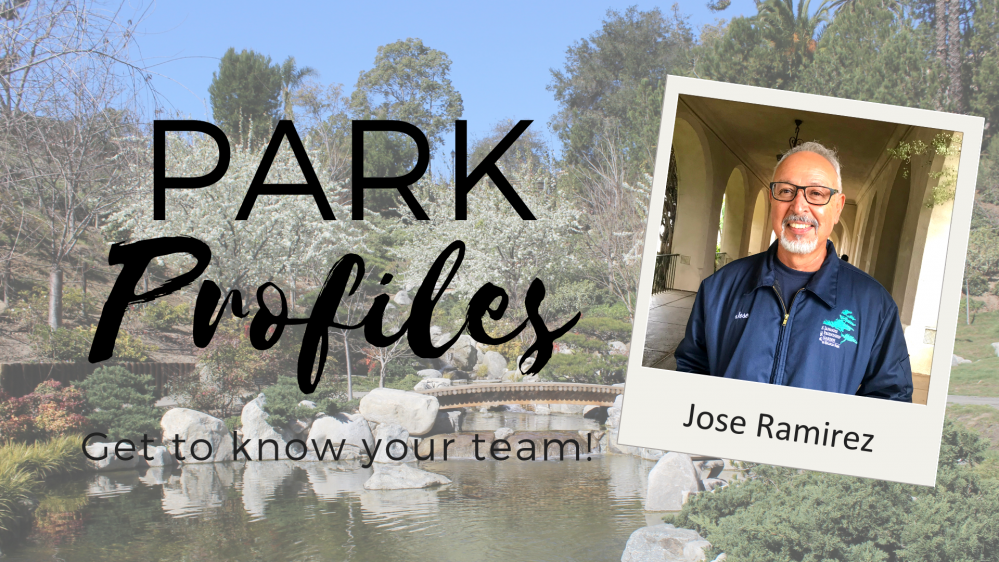 Jose Ramirez is the Facilities Manager at the Japanese Friendship Garden. Jose has been with the Garden for nearly seven years managing landscaping and facilities, and implementing sustainable practices to realize the Garden’s goal of becoming a zero-waste organization.

How did you become the facilities manager for the Japanese Friendship Garden?

It’s kind of a long story, before this I worked for the San Diego Reader as a graphic designer where I designed ads and editorial layouts. It was fun, but I needed a change and when I left I was trying to figure out what was next for me when I found that a colleague of mine was working at the Japanese Friendship Garden. I started there in 2013 as a landscape maintenance worker. I noticed a few things that needed to be taken care of and fixed, so I started on a few projects that worked out really well. For example the Bonsai area needed a lot of attention and some painting, so I offered to fix it up and I did. After that management asked if I could take a look at a few issues with the deck, which I found needed to be torn down and redone. I oversaw that project as well, and my role evolved pretty naturally into managing all of our contractors and facilities. It was a big transition to go from design and computer work to what I do now, I basically had to reinvent myself and I’m proud and blessed that I was able to do so.

What do you like most about working at the Japanese Friendship Garden?

I would say being outdoors and in the garden. I work mainly in the lower garden where there’s a lot of wildlife like birds, squirrels, lizards, even a blue heron that sometimes tries to eat our fish. So I really like working outdoors, I worked behind a computer for about 33 years so it was a bit of a transition but it was well worth it. I’ve learned that I really enjoy talking to different people and meeting so many visitors from all over the country, even all over the world. It’s been great and I’ve enjoyed working with everyone at Japanese Friendship Garden. They make it easy.

The Balboa Park Sustainability Program has had the pleasure to work with the Japanese Friendship Garden in a variety of ways. Can you share a bit about the Garden’s sustainability goals?

Because we are a garden with over 12 acres of property, we produce a lot of green waste and so our main goal is to become a zero-waste nonprofit. We’re trying to get to a point where we save all of it, either through composting or to use as mulch, instead of having to send it away to landfill. We do some composting now but it’s not where it needs to be, I want to get to a point where all of our waste stays here and is reused.

Do you have a favorite event at the Garden?

Our Cherry Blossom Festival is a lot of work but it’s such a fun event. We have a lot of events around the year, but with Cherry Blossom we see even more visitors, get to interact with the public and answer questions (or try to).

What is your favorite thing about working in Balboa Park?

My favorite thing is that I’ve always enjoyed Balboa Park before even working here. Balboa Park has been kind of my life. I’m from San Diego and lived nearby growing up, when we were kids we played at the Peppergrove playground and in the canyons. It’s just fun to work in this setting.

What do you like to do outside of working here in the Park?

I like to spend time with my wife, we take drives to different places like the Huntington Botanical Gardens in Pasadena, hike and spend time outdoors. And occasionally we’ll go to a movie.

Do you have a favorite book, TV show, movie or artist?

I like a lot of different artists and movies but right now I’m enjoying Game of Thrones even though the series finale is coming up. I enjoy old school rock and roll like Led Zeppelin, The Rolling Stones, The Doors and Stevie Ray Vaughn, and some current groups like Imagine Dragons, Coldplay and Los Lonely Boys.

Well, Japanese Friendship Garden! There are a few behind-the-scenes spots that I like because they’re so quiet and secluded, it almost feels like you’re somewhere else.