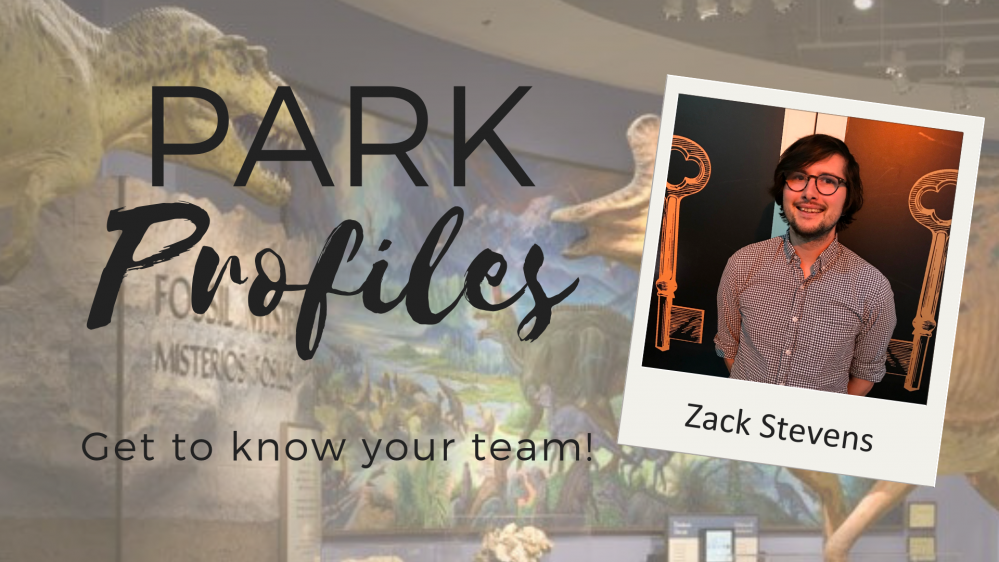 Zack Stevens is a Visitor Services Lead at the San Diego Natural History Museum where he helps supervise the Visitor Services team in daily customer service operations. Zack has worked for The Nat for almost five years and was instrumental in designing and building their newest addition, the Escape the Nat escape room!

How did you become visitor services lead at the San Diego Natural History Museum?

I started working in Visitor Services at the Nat as a summer job a couple summers ago. It was really swell, and it’s a fun and rewarding job and a great place to work so I stuck around and now I’m a lead! I’m coming up on five years now.

What do you like most about working at the Nat?

I like that we’re the keepers of public knowledge, which is a sentiment I think a lot of folks in the Park can relate to. It’s great to be a gathering place for visitors to learn about our topic, which in our case is nature in the natural world, and to create a fun space for people to engage with and interpret ideas about science and nature. Being a part of that process is really fun and really gratifying.

What would you say is the most interesting part of your job?

I guess you just never know what kind of new challenge your job might bring for the day!

Can you tell us about your role in developing the Nat’s Escape Room?

It’s kind of a long story, but we have this funding project at the Nat called the Evolutionary Venture Fund. We’ve done a couple rounds of this already, but basically through this program we have funding from our donors that is specifically allocated to fund staff ideas. The idea is employees get to pitch ideas to an internal committee, and the committee decides what gets funded. One of our scientists pitched the Escape Room, and it got picked up because it was such an exciting and fun idea. I volunteered to help out with it because I’d worked at escape rooms before and I was really excited about this project. I’ve been a longtime escape room enthusiast, and now we were bringing one to the Nat, how could I pass that up?! In doing so I ended up designing much of the experience, writing the marketing for it, determining where it can fit in the Nat and so on. It essentially became my project.

Can you tell us about the Escape Room without giving too much away?

Well, it’s not scary like most people might assume. It’s a live action puzzle game that you can do with your friends and family. One of our focuses for Escape the Nat was to find a museum moment where we can put people in this live action game and they can also gain some kind of insight into nature, our mission and what our scientists do at the Nat. So a big part of the game is going to be insight into collections management. Teams will have to go into one of our herbarium collections and work like our scientists to find a specific sample with very limited data. Scientists do a bit of puzzle solving themselves with the data they have when developing complete profiles of specimens, so it’s highly immersive and engaging and that’s a really exciting outcome of this project.

Do you have a favorite exhibition at the Nat?

They’re all good! I’m very partial to Coast to Cactus, it’s about biodiversity in San Diego. It’s a really well done exhibit and I think it has a lot to offer people of different ages, experiences and levels of interest.

As Valentine’s Day approaches, what is something you love about working in Balboa Park?

Gosh… a lot! I guess I just appreciate that our city is lucky enough to have such a wonderful, centrally located Park to enjoy. I feel like in a lot of ways it could have gone differently, like this land could be condos right now, but we’re fortunate enough to have held on to it as a center for arts, culture and science in San Diego.

What do you like to do outside of working at the Park?

If you could be any animal what would you be and why?

I was a volunteer educator in college and one of our lesson plans included drawing your favorite barnyard animal. I’ll never forget this one kid said his favorite animal was a volcano. He knew volcanoes aren’t barnyard animals, but he wanted to draw a volcano and so he did. If I could be any animal, I guess I would be a volcano, because we often assume there are rules in places that there actually aren’t. The world is ours.

Definitely the Botanical Building, it smells really nice in there and it’s always nice and cool and moist even on a hot day. Plus it’s free!

What is your favorite One Park – One Team program and why?

I’ve always been a fan of OPOT Game Nights and I believe there’s one coming up…Feb. 20 at 6 PM at the Nat. So yes, game nights!