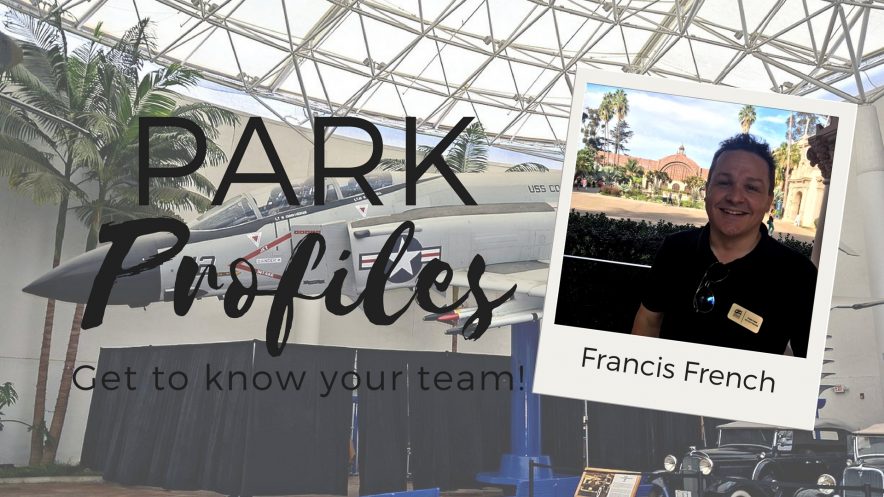 Francis French is the Director of Education at the San Diego Air and Space Museum. His enthusiasm for aviation and space, paired with his passion for inspiring continued learning beyond the classroom, have been key to the success of the education programs and events available to visitors of all ages.

1.  How did you first get involved with the Air and Space Museum?

Before coming to the Park, I was writing for Spaceflight magazine and would often go to the Air and Space Museum as media to interview new space inductees of the International Air and Space Hall of Fame. I had previously worked at the wonderful Fleet Science Center, so already loved the Park very much. When I was invited to apply for the Director of Education position at the Air and Space Museum, I felt it would be a perfect fit.

2. What do you like most about working in education?

The word that comes to mind is “inspiration.” I used to work as a school teacher in England, and eventually decided that museum education was where I wanted to be. Although I can’t remember every day I had in class as a kid, I can remember every field trip. Now working at a museum, I love seeing our education team inspiring students to continue learning about the world, and in doing so, I continue to be inspired as well. It’s never boring!

3. As the Director of Education, what has been the most interesting or the greatest experience you have had?

I think watching how museums can become a learning vehicle for anyone is a very fulfilling experience. There are often kids that come to the Park through programs or organizations such as School In The Park,  who have never been to a museum or to Balboa Park before and initially see it as ivory-tower: as if it is not for them. But through these programs they are able to experience the Park’s institutions, and I get to watch the museums become their learning tools. It is really gratifying to see students return with their families and show them everything they have learned in institutions such as the Air and Space Museum.  Over the years I have also been lucky enough to work here with  some very well-known members of our Hall of Fame, including Neil Armstrong, Buzz Aldrin, and Chuck Yeager!

4. Any advice for encountering a new situation at work?

I think it is really important to remember that a good idea can come from any team member, not just someone with a higher job position, and being open to listening to everyone’s opinion can often solve any situation. Whether someone has a higher up or lower position than you, they will have a different experience or understanding of a problem that can lead to a better solution.

5. What do you like to do outside of working here in the Park?

I recently moved closer to downtown, and am really enjoying going to the Opera, watching theatre productions, and going to concerts. I also really enjoy traveling, although when I travel, like so many in our profession I often end up at museums.

I am currently reading Leonardo Da Vinci by Walter Isaacson, and am really enjoying it! I don’t really have a favorite TV show but like most of the nation I am really enjoying Stranger Things, and I am looking forward to the next season of The Man in the High Castle. I also don’t necessarily have a favorite movie, but I love watching Citizen Kane, in part because the opening scene was filmed here in Balboa Park. Currently, I have been listening to the opera La Traviata, which helps with any commute into downtown.

7. Since we are in the peak of the holiday season, what is your favorite thing to do during the holidays?

My favorite holiday activities are a little unconventional. English winters are usually very cold and dark, so when I was growing up we would often leave for the winter to somewhere warm, such as hiking the mountains of Morocco with Berber tribesmen. Although most people probably want to head towards the snow and the cold for winter, my favorite thing is being able to walk on the beach on Christmas Day in warm weather – it will forever feel like a luxury to me.

I wanted to be an archaeologist. I am still really interested in the field, and in recent summers I have been in France and Spain looking at the prehistoric cave art found deep underground in both countries, as well as stone circles in the remote Orkney Islands.

Although there are so many beautiful outside spots, if I have to choose one I’ll say inside The Old Globe. They have been premiering groundbreaking new theatre that a year later is on Broadway, and we are lucky here in San Diego to have the opportunity to see it here first. Going behind the scenes to their prop shop and costume shop is also an amazing insight into how they make it all happen!