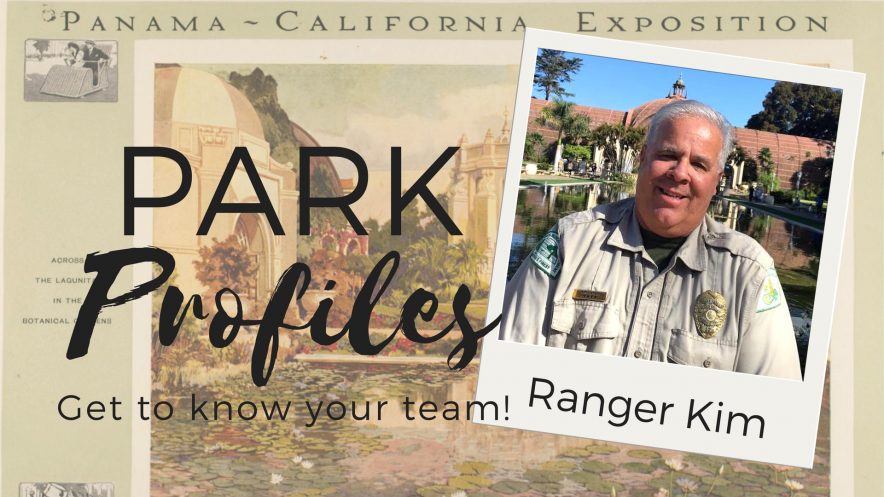 Kim Duclo is a Park Ranger here in Balboa Park. He has dedicated a little over three decades to Balboa Park both inside and outside of the institutions, and has become one of the most recognizable faces of the Park. His knowledge and excitement for his work translates to the team members he meets, and the millions of visitors that come to Balboa Park.

1. How did you become a ranger for Balboa Park?

I originally started working in multiple museums around Balboa Park, the first being the Museum of Photographic Arts in 1983. During my lunch breaks, I often found that I was answering visitor’s questions around the Park and came upon the realization that it would be really amazing to be a Park Ranger in Balboa Park. I happen to run into a Park ranger and asked if they were hiring and he said no, but a year and a half later began volunteering under a different Ranger. I knew I wanted to pursue becoming a ranger and began working as a Park Aide at Cuyamaca Rancho State Park to gain the necessary experience, which led me to eventually becoming a Park Ranger here in Balboa Park November of 1995!

2.What has surprised you most about working here in the Park?

Every day I come to work, I learn something new and although it sounds a little cliche it really is true! After 22 years as a Park Ranger, I learn about a new plant or a different piece of history about the Park that I had never heard of before. Another surprise I’ve found is the enjoyment I get from working with kids who come to visit the Park on field trips or classes, and seeing them experience and learn about the Park just as I did when I was a kid.

3. What is the most interesting part of your job as a Ranger?

I think the utter unpredictability of the job itself is definitely interesting. When I arrive to work I usually have a game plan or idea of what I will be doing that day, but it always ends up changing because something comes up or I receive a call through the radio that I have to get to the other side of the Park for something. Although it can be hectic at times, it is never stale and gives me the ability to have some freedom with what I want to do on a daily basis.

4. What is your favorite story/quirk about the Park?

I have so many and this probably changes on a daily basis! I have a particularly good memory of the House of Hospitality. When my son was two years old I brought him to visit the Park and there was an event taking place in the ballroom of the House of Hospitality for the death of Princess Diana, and the special guest speaker was Nobel Peace Prize recipient Desmond Tutu. I was standing in line getting coffee from the cart, when none other than Mr. Tutu walks in! For some reason he noticed my son, came straight up to us, and my son gave him a high five. It was definitely an unforgettable story!

5. What do you like to do outside of working here in the Park?

My favorite movie is one of the first I remember going to watch in theaters with my dad, which is It’s a Mad Mad Mad Mad World.I have great memories of watching it that first time any many times after with my father. I would say Monty Python and the Holy Grail is high on the list as well and am a big fan of Ken Burns’s documentaries. My favorite book is Catch 22 by Joseph Heller, but I also enjoy history novels. I can’t pick one song, but if I had to pick an album, it would be Patsy Cline’s 12 Greatest Hits or In the Wee Small Hours by Frank Sinatra.

When I was graduating from high school I really wanted to be a documentary filmmaker or hollywood director. I went on to UC San Diego and studied filmmaking and media, where i was able to make some documentaries and also worked under a film professor where I would drive back and forth to Hollywood and take film projects he was working on!

8. Since Halloween quickly approaches, do you prefer tricks or treats?

I’m a treat guy, I don’t think I’ve ever turned down a treat, but my son who loves everything about the season from choosing a Halloween costume to decorating the house would probably say he prefers tricks!

I would say I don’t have a favorite spot, rather a favorite time which is right at sunrise or sunset. Those are the most beautiful times of day to be in the Park.